More than 60 leaf rust resistance genes and QTLs have been described in wheat (1). Many of them are race-specific genes, and several are currently used by breeders to develop new cultivars. However, the resistance provided by these genes can be short-lived as new races of the leaf rust pathogen, Puccinia triticina, are continuously evolving and acquire virulence against these genes. In order to obtain cultivars with good levels of protection under high disease pressure, several ‘slow rusting” gene complexes need to be combined. Besides, the effect of slow rusting genes is more dependent on environmental conditions. Wheat breeders can use slow rusting genes as a complement to race-specific genes. The availability of molecular markers greatly facilitates the pyramidization process.

A small group of leaf rust resistance genes are known as "slow rusting genes", such as Lr34 (2) and Lr46 (3). They provide durable and non-specific adult plant resistance but their effect is more reduced than that of race-specific genes. Lr34 was recently cloned (11) and it was shown that it is the same gene as Yr18 (resistance to adult plant stripe rust), powdery mildew resistance (Pm38) and leaf tip necrosis (Ltn1). This gene codes for a putative ABC transporter. A similar tight linkage or pleiotropic effect was observed between Lr46and Yr29, also a slow rusting gene for stripe rust.

Lr34 is located on the short arm of chromosome 7D, close to locus Xgwm295. The resistance phenotype displayed by this gene includes longer latent period, fewer uredina and smaller uredina size. Lr34 is tightly linked to the leaf tip necrosis (LTN) locus, it is also possible that the LTN phenotype could be a pleiotropic effect of Lr34 itself (5).

For some CIMMYT germplasms the LTN phenotype can be used directly as a morphological marker (6). Lagudah et al (12) developed an STS marker, csLV34, that maps 0.4 cM from Lr34, and was validated in many lines and cultivars from different breeding programs worldwide. In the paper reporting the cloning of Lr34 (11), Krattinger et al. described several markers that differentiate among the loss-of-function alleles of Lr34. In addition, a KASP marker is available. 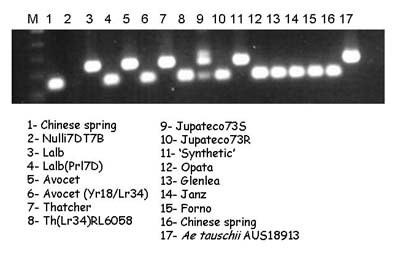 The KASP assays (KBiosciences competitive allele-specific PCR) were performed according to manufacturer’s instructions, the endpoint genotyping was performed on a PHERAstar Plus microplate reader and data were analyzed using the KlusterCaller software.

Previously to the development of STS marker csLV34 and the positional cloning of Lr34, there were several markers available that mapped farther away and were validated in some populations. Suenaga et al. (7) had determined that Xgwm295 and Xgwm130 were closely linked to each other at the center of the slow rusting QTL. Later, Schnurbusch et al. (10) analyzing an Arina x Forno population found that the region containing Lr34 and flanked by Xbarc352 (distal) and Xgwm295 (proximal) spanned 17.7 cM. Below we provide protocols for using this markers.

The microsatellite locus Xgwm295 maps close to the Lr34 locus but its detection is sometimes difficult to optimize. Details of the PCR protocol can be obtained from the WMS295 probe record in GrainGenes.

Final concentrations of the reagents used in the PCR amplification:

All the gels shown below are 6% polyacryalmide gels stained with ethidium bromide and visualized under UV light (method).

Xgwm130 is in a proximal position relative to Lr34 (ref. 10 and also see maps in the main section). One potential problem with this marker is that it detects more than one locus. The red arrowhead indicates a putative identification of the band cosegregating with Lr34. The information provided should be considered preliminary.

Please read carefully the communications below from people also working with this marker. Input from users is welcome.

R.Rahaman, H.Bariana, M.Shriflou and P. Sharp personal communication: gwm130 showed a band of 133-bp in 21 genotypes carrying Lr34, whereas a band of 135-bp is amplified in 20 genotypes lacking Lr34. The Lr34 carrying cultivar Suneca was an exception, where a 120 bp-band was amplified.

Manilal William, personal communication: In some populations (Fukokumughi x Oligoculm and Avocet x Parula) the Xgwm130 allele is scored as a codominant band, while in other populations (Frontana x Inia66) it has been scored as a dominant band, which is present in Inia66 and absent in Frontana carrying Lr34/Yr18). The apparent size of the +/- allele is about 110. In multiple mapping populations it was not possible to map any allele of Xgwm130 on 7A.

Lr34 is a gene present in many parent lines that have been used for breeding commercial varietes around the world. The STS marker csLV34 was proved an effective marker to differentiate between llines carrying Lr34 and its isogenic counterparts without the gene. Among others, csLV34 was validated in Thatcher, Glenlea, Jupateco R, Opata, Fukuho-komugi, Condor, Cook, Anza, Forno, Bezostaya, Otane and Chinese Spring.

Singh and Huerta Espino (8) analyzed different yield-related parameters in the Mexican spring cultivar Jupateco and a near isogenic line (NIL) derived from it and carrying Lr34 (Jutapeco-Lr34). They found that in disease-free environments Jupateco-Lr34 had significant, but generally small, reductions in biomass, grain per spike and grains/m2. In some experiments they also observed negative effects of Lr34 on mean grain yield and mean grain weight. On the other hand, in leaf-rust affected plots Jutapeco showed significantly higher yield penalties than Jupateco-Lr34.

Labuschagne et al. (9) studied the effect of Lr34 on breadmaking quality in the South African cultivar Kareen. They compared Kareen with several different NILs derived from it and carrying Lr34. Kareen-Lr34 NILs had a flour protein content and water absorption values significantly higher than that of Kareen, while flour extraction and mixograph development time were similar. Only one Lr34-NIL showed a significantly lower SDS-sedimentation value. The authors concluded that Lr34 has an overall advantageous effect on breadmaking quality on this line.