'PI 181434' is a spring wheat germplasm originating from Afghanistan that was resistant to of stripe rust in a series of screenings carried out in Washington from 2004 to 2009. The type of resistance was all-stage, and it was effective to races accounting for all types of virulence in that period.

Li et al. (1) crossed 'PI 181434' and the 'Avocet Susceptible' cultivar to produce a F2:3 population to map the resistance gene. In this population stripe rust resistance was controlled by a single dominant gene on chromosome arm 3DL designated Yr45.

In the pathogenicity tests Yr45 showed resistance to seven races of Puccinia striiformis f. sp. tritici. Among them was PST-100, which has been the most predominant race in the USA since 2005 (2) and PST-127, a race with virulences to 17 of the 20 differential genotypes.

A set of molecular markers including SSRs and RGAPs (resistance gene analog polymorphism) were scored. The closest markers to Yr45 were two RGAPS, Xwgp118 on the distal side and Xwgp115 on the proximal side, that mapped at 4.8 and 5.8 cM, respectively (see Figure). Both markers are dominant, and amplified PCR products in the 'PI 181434' parent. However, some lines that do not carry Yr45 also had one or both markers present. An analysis of the sequences of the amplification products from these lines and 'PI 181434' revealed the presence of some SNPs that could be used in these cases (see Figure 3 of reference 1). Also, in a paper published later that reported a genome wide association mapping for stripe rust resistance in a set of hexaploid wheats (3), the authors found another SNP (IWA3012, wsnp_Ex_c25945_35206573, 9k Illumina Infinium SNP assay) significantly associated to stripe rust resistance in a location similar to that of Yr45. Although it was not further studied or validated, this SNP could be considered as an alternative marker.

Since Xwgp115 and Xwgp118 are both dominant markers, not very closely linked to Yr45 and there are lines in which the gene is not present but still yield positive results for one or both markers, users are advised to carefully test their parents before incorporating these markers in a breeding program. 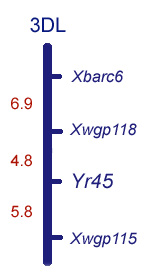 Final concentrations of the PCR mix

PCR reactions were performed in a GeneAmp® PCR System 9700 thermo-cycler. The PCR products were separated on a 5% polyacrylamide gel and silver-stained for visualization