The rice Grain Width and Weight 2 (OsGW2) gene was previously described as a negative regulator of grain weight and width. It encodes a RING-type E3 ubiquitin ligase (1). The wheat homolog in wheat is the TaGW2 gene, with homoeologues in the three genomes, although the most closely studied to date is the A genome homoeologue, TaGW2-A1. Two studies showed in Chinese wheat lines a significant association of a single nucleotide polymorphism (SNP) in the promoter region of TaGW2-A1 with thousand grain weight (TGW) and grain width (2, 3). These studies also showed a negative relationship between transcript levels and grain width. Another study determined that a single base insertion in the last exon of TaGW2-A1 produced a truncated protein that was associated with increases in TGW and grain width (4). In contrast, Bednarek et al. (5) down-regulated the expression of the threeTaGW2 homoeologues by RNAi and found decreases in grain weight and size in hexaploid wheat. It cannot be ruled out that TaGW2 has additional functions, and the drastic reduction in expression levels seen in the RNAi experiments could affect those functions in a different way than the absence of only one of the homoeologues.

Simmonds et al (6) screened the tetraploid Kronos TILLING population to identify mutants in TaGW2-A1. They identified a G to A transition, designated G2373A, in the splice acceptor site of exon 5 which leads to two variants of mis-splicing inTaGW2-A1. The most frequent variant results in a frame-shift that generates a premature termination codon that yields a shorter protein of 134 amino acids. The other is an in-frame variant missing three amino acids. The mutant allele was introgressed into tetraploid and hexaploid germplasm and tested in thirteen greenhouse and field experiments. Overall the TaGW2-A1 mutant allele significantly increased TWG (6.6%), grain width (2.8%) and grain length (2.1%). The authors developed a KASP assay to discriminate between the wildtype and mutant in the splice acceptor site of exon 5.

Simmonds et al (6) developed a KASP assay to differentiate the two variants of the G2373A SNP. Two allele specific reverse primers were designed with either a G or A at the 3' end: primer K2 for the wildtype (G) and K3 for the mutant (A) allele. The common primer (K1) includes a 3-bp indel present in the A genome and absent in the B genome. The allele specific primers (K2 and K3) carry FAM and HEX tails.

Since the amplicon size is small, 121-bp, there is no need for extension steps. PCR was performed on a Peltier PTC-225. Fluorescent end-point genotyping was carried out using a Tecan Safire plate reader (Tecan Group AG, Mannerdorf, Switzerland). Two images of typical results obtained with tetraploid (Kronos) and hexaploid lines (Paragon) and their respective mutants and heterozygous are shown below. 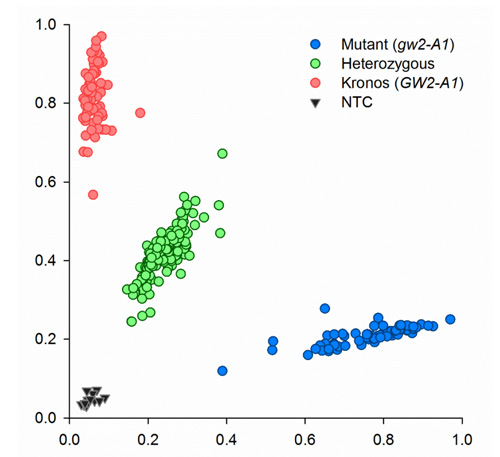 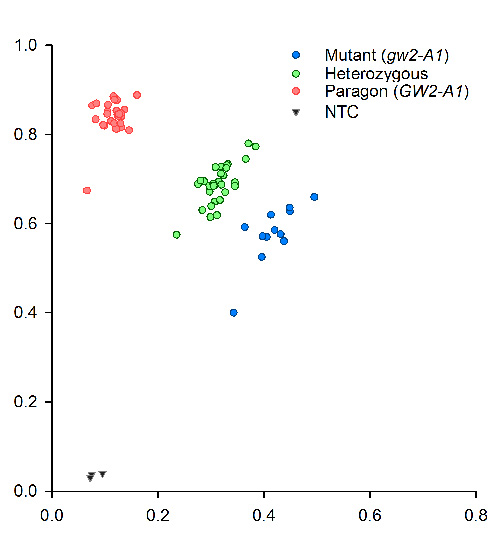