Polyphenol oxidase (PPO) activity is a main factor in the darkening of unfermented wheat flour dough.  The presence of active PPO leads to the discoloration through the formation of o-quinones (1,2), causing the formation of dark pigments and ultimately leading to perceived quality loss.

Hystad et al. (3) identified and sequenced the line 07OR1074 which carries null mutations for the genes Ppo-A1 and Ppo-D1 and has a novel low PPO mutation on Ppo-A2.  The exact alleles carried by this line are: Ppo-A1i, Ppo-A2d, and Ppo-D1f. Markers designed in the paper were not optimal for wheat breeding purposes.  The PPO-D1CAP, a CAPS marker for detecting the null mutation, was codominant but required two steps to determine genotype.  The Ppo-A1 marker PPO18 did not amplify in all backgrounds and thus was not codominant.

Adam Heesacker at Oregon State University developed a codominant KASP SNP for the Ppo-D1 gene and its alleles (Table 1).  The Ppo-A1 gene posed a challenge for development of a codominant marker because the null allele (A1i) shared its SNP location with the low PPO activity allele (A1b).  In the process of trying to make PPO double nulls by marker assisted selection, crosses were made between 07OR1074 and three hard white winter OSU backgrounds.  The resultant F1s were backcrossed to respective recurrent parents and the progeny were allowed to self, making the BC1S1.  BC1S1 seed was grown and DNA was extracted from individual plants.  The SNP marker for Ppo-D1 was run and selection occurred against D1b carriers (both homozygotes and heterozygotes), lowering overall genotyping the remaining were genotyped with marker PPO18.  The resulting progeny (BC1S2) fixed for the null allele on genome D (D1f) were then allowed to go to seed.  The seeds were phenotypically assayed using the L-DOPA measurement method (AACC International Method 22-85.01) and showed unexpected results. Progeny from parents donating the A1a allele showed normal presence-color/absence-no color segregation of phenotype.  Progeny from a parent donating the A1b allele showed all seeds having null-no color phenotypic response.  Looking at the PPO18 genotype, it made no difference whether the allele combination was A1b/A1b, A1b/A1i, or A1i/A1i, all combinations carried the same phenotype. Thus we now state that A1b is not just a low PPO allele but is a null.  A codominant KASP SNP assay Ppo-A1 was developed to exploit A1a versus A1b and A1i (Table 1 and Figure 1 for typical results).

Oregon State University is willing to provide Northwest adapted PPO-null lines upon request.  If you are using these markers to develop a variety, please cite this web page and Adam Heesacker, Hilary Gunn, and Robert Zemetra as webpage authors in your variety release.

*Head sequence must be added for KASP markers to work 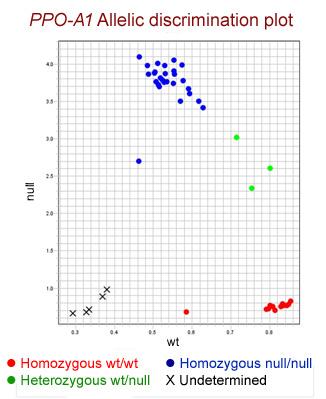 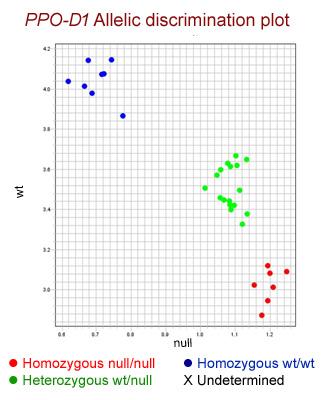